Welcome back!
Thanks to everyone who read my first post, and for all the lovely encouraging comments 🙂 Sorry for the long break in between posts, I’m still apprehensive about posting anything unless I’ve edited it to the death but hopefully I’ll stop worrying so much soon. 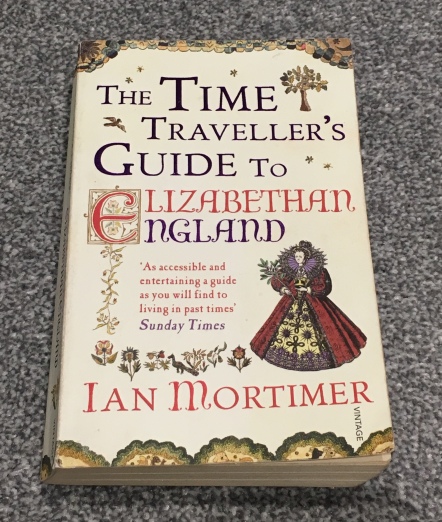 This may have been the most fun I’ve ever had reading. Anyone who knows me will be able to tell you that over the past couple of years I’ve become a bit obsessed with learning about history, particularly the Elizabethan period. And that’s not only because of my steadily-growing appreciation for Shakespeare, (believe it or not I wasn’t so keen on the Bard at school, but how things change).

Mortimer’s book kept grabbing my eye in various bookshops in Chichester last year but once again I held off buying due to it only being available in hardback (this was when I was a student with little to no money and a dissertation to write, may I remind you). It was only when I’d begun to forget about it that I visited Rochester in November and found it in one of the many charity shops there for £1 in paperback. Bargain!

This was the first non-fiction book I’d genuinely been excited about buying. Before, the only reason I’d open a non-fiction book was because I knew it would count towards supporting an essay at uni. However, The Time Traveller’s Guide is not the kind of standard historical non-fiction I’m familiar with.

Instead of presenting you with some basic facts, and hinting at what Elizabethan life might have been like, Mortimer immediately places you in the 16th century.  Using the present tense, he transports you around the country and offers various insights on ways of life for each social class, appropriate to different time periods during the century. In one short paragraph, Mortimer allows you to experience the lifestyle of both aristocrat and peasant. You are informed of what to eat; how to speak depending on who you’re talking to; what to wear, whether practical or fashionable; what recreational entertainment is available nearby; how to build your house or make alterations to it depending on your income and location… The lists are endlessly informative and entertaining, and I learned a great deal of unique information that I never even realised was missing from conventional history books. For example, Mortimer details some sensible and some insane home-made remedies for curing ailments and making cosmetics; the best methods of cleaning and whitening fabrics; terms and codes of the criminal underworld; and the varying rules of early football.

Aside from the quirky facts, Mortimer also dispels common misconceptions of the era, clichés that have been reinforced over the years by film and television adaptations. For instance, Mortimer discusses how conscious Elizabethans actually were about personal hygiene, even though he explains that the word ‘washing’ held a slightly different meaning back then. I won’t spoil it for you. You may not think it sounds fun now, but it’s actually surprisingly interesting.

The sheer amount of research that must have gone into this book is something to marvel at. I thought initially that visualising the reality of nearly 500 years ago would prove difficult, but the clarity of Mortimer’s writing is astounding. Every piece of information is supported by examples from historical records. Mortimer gives names of real people and real events, and will refer back to some of them numerous times throughout the novel so you become more acutely aware of societal and regional contrasts. This awareness comes with emotional responses, and not every detail Mortimer offers is enjoyable or amusing. Reading about the destitute occupants of ‘Shipdams’ in a Norwich parish: some disabled, some abandoned with many children, who must either knit or beg all day because they receive no alms, and then later reading a passage in the ‘Women’s Clothing’ section from ‘Lady Ri-Melaine’ (162) rudely demanding all sorts of unnecessary wardrobe changes from her servant inspires anger about the extreme injustice between both ends of the social scale. It is even still depressing to realise that Lady Ri-Melaine only possesses her frivolous lifestyle because of her husband’s wealth. She is lucky, unlike ‘Helen, the wife of John Williams… heavily pregnant, about to give birth, and cannot work. Her husband has disappeared off to Cambridge and left her with no money.’ (58) No additional detail is required; it is clear how dangerous a situation like this is to an Elizabethan woman. Mortimer effectively highlights women’s oppression and some of their achievements despite it respectively, which resonate with ongoing conversations about feminism in the current day.

Mortimer’s afterword is the perfect summary of his intentions with this book: that although many aspects of Elizabethan life were wildly different, (and considerably more violent), compared to now, the Elizabethan era was not just some curious time period isolated from our idea of the ‘real world’. The people Mortimer presents to us are our ancestors, people who shaped our world in some way, whether they were conscious of it or not. Mortimer’s final word turns our attention to the arts, those marvellous pieces of work from Elizabethan England that have conquered time itself and which we always return to because they act as connections to our shared humanity. I think The Time Traveller’s Guide to Elizabethan England will live on in the same way for me, as I hope it will for many other history lovers. I’m grateful to Ian Mortimer for offering such an immersive reading experience.

Thanks for reading! Let me know if you’ve read this, or if I’ve convinced you to give it a go 🙂